Let's hear it for the girls!

Growing up in Australia with English parents gave me a slightly different frame of reference when it came to pop culture. While my friends were watching Australian shows like Neighbours and Home and Away and US imports like Full House and Growing Pains, I was more likely to be tuned into the ABC to catch the latest episodes of The Bill and Fawlty Towers. In retrospect, these were the better choices, but I felt hard done by at the time.

I also got to watch some really odd movies too.  Sure, there was an early exposure to Monty Python that gave me some cred in later years. But I also had a lot - and I mean A LOT - of exposure to the British institution that is the "Carry On" film series.

No idea what I am talking about? Well the wikipedia page describes it as "a series of low-budget British comedy films" that "are a mix of parody, farce, slapstick and double entendres". Most were filmed in the 60s and 70s and, let's just say, the female characters were only well-developed in one way - wink wink, nudge nudge, say no more! The females were one of two types: matronly or sex kittens. The sex kittens were delightful, bubbly little creatures that everyone adored (aside from the matronly women of course) while the matronly women served as nagging buzz kills to the lecherous men who would be chasing the sex kittens around for most of the movie.


And I am pretty sure that it is these movies and their two-dimensional characterisations of females that lead a young me came to think that this was the ideal woman:


This didn't, thankfully, have a lasting impact on my views about gender roles and it certainly didn't mean that I went on to neglect my studies and instead focus on being a pretty little thing with no opinions and a saucy giggle. But it did have a different impact on me. From a very young age, it made me really, really want to have big boobs when I grew up.


This was, of course, later reinforced by others who I looked up to: Betty and Veronica, Jessica Rabbit, Samantha Fox, Jane Russell and Marilyn Monroe in "Gentlemen Prefer Blondes", every single one of the 80s Supermodels, Kelly Bundy from "Married: with Children", David Lee Roth's music videos - the world seemed to be telling me that being a well-endowed woman equated to being, essentially, awesome.

(Importantly, you were also guaranteed to get an awesome boyfriend.)


Sadly, however, mother nature had other plans for me. I was to doomed to be a member of the IBTC (the Itty-Bitty Titty Committee for the uninitiated).


Sometimes life is just so unfair!


By the time I was 15, when everyone else had already been visited by the boob fairy except for me, it seemed to me that my fate had been sealed. So my plan was simple - I would wear a padded Wonderbra until I was 20 or so and then I would buy myself a lovely pair of silicone double Ds (because, as Janet in that awesome 90s movie "Singles" said, "If you're going to have the operation, you know, have the operation").


Thankfully, though, something happened that turned me away from the knife and put me on the track to self-acceptance.


And that was the rise of Kate Moss.


She was the anti-supermodel who changed the face of fashion in 90s. Her face wasn't as conventionally beautiful as the Supers who reigned at the time and she didn't have the Amazonian curves that they had either.


When Kate Moss hit the mainstream in the mid-late 90s, she was not exactly hailed as a positive role-model for girls. Her waifish, spaced-out appearance was accused of encouraging eating disorders and of glamourising heroin use through her "heroin chic" style. But she was a positive role model for me, at least - because she proved that you could be a super-hottie and be entirely flat-chested! And, by providing an alternative to the buxom babes who seemed to dominate the media before her, Kate Moss's raise to fame also raised my love for my tiny, tiny chest.


And since then, there have been many other gorgeous but small breasted celebs, like Kristen Stewart, Mila Jovavich, Natalie Portman, Zoe Saldana, Selma Blair - all totally cute and all lucky to be able to fill a B-cup.


Of course, I am not totally delusional - I know that big boobs are still highly desirable in Hollywood and, let's face it - they look pretty ace. I mean, they certainly haven't harmed the careers of these gals:


Katy Perry
Marion Cotillard
Angelina Jolie
Jennier Lawrence
The thing that I love now, though, is that there no longer seems to be a fascination with female celebrities needing to have perfect, large breasts - so long as you dress in a way that makes the best of your assets, your boobs won't get in the way of you being a Hollywood hottie.


Of course, big or small, it is totally possible to dress in a way that makes your boobs look ridiculous and this is never going to be good. Right, Tori Spelling and Rachel Zoe? 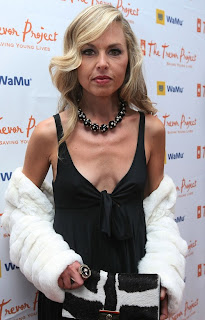 
The thing to remember is that there will always be certain outfits that will suit small boobs, big boobs or in-between boobs more - but if you are fighting what you have got, you risk dressing in a way that won't make the most of your girls.


So I say, ladies - no matter what your cup size, be proud and embrace your boobies!
Posted by Emma M at 5:15 PM

Zoe Saldana has always scared me. Can't really say why. It's a puzzle.