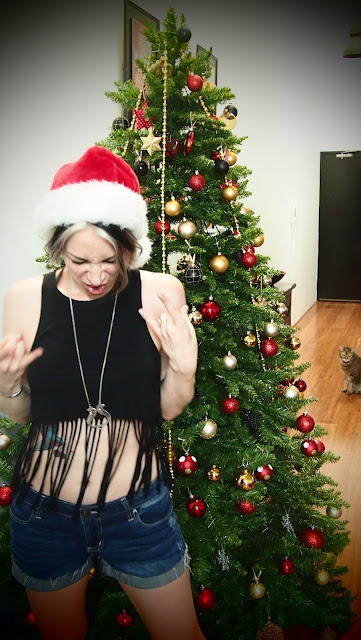 Time to put down that mince pie and start thinking about the new year that you are about to embark on.

Because no matter how crappy last year was for you, 2013 has something that 2012 hasn't got:

Which is why, at the end of each year, we all feel compelled to come up with a list of things that we are currently failing miserably at with the hope that this will somehow make us more focussed on doing things differently in the new year.

Unfortunately though, notwithstanding best intentions, most people manage maybe a couple of weeks of sticking to their resolutions before going back to their old ways. At least until next year, when they start to think about it all over again.

I have a pretty woeful record myself. Giving up caffeine, going vegan (I ended up doing this but not off the back of a new year's resolution), exercising more, focussing on my career, reading more - all of them managed to keep me interested until about January 5 before the drudgery of day to day life made keeping my new resolutions seem unimportant and, to be honest, a bit of a pain in the arse.

Last year I had a pretty massive list of things to change or improve on in 2012. I wanted to do more yoga, eat better, be more organised, try new things, spend more time with friends and family, give more to charity (but do proper research first so my money went where it would help the most), draw, write, dance, sing and read more, see more bands, see more theatre blah blah blah. It was ridiculous. Way too much stuff to focus on for 5 days.

But each one was actually important to me so I didn't want to just give up on them all together either.

So, rather than set myself up to fail (again) I decided that I would spread them out over the whole year instead. I picked one thing that I wanted to work on for each month of the year. This way, I wouldn't have to feel guilty about something that was on the list just because I hadn't done it in January - I knew I would be getting to it later on in the year (maybe)!

For example, February was all about work - getting more organised, finding out what training sessions were on, looking into getting an executive coach etc. I didn't have to get it all done by a particular date or anything - I just had to think about what I wanted to improve about my work life in February and set a few things in motion. September was devoted to yoga - so I decided I would try to do yoga at least once a day for the whole month (I think I missed three days), tried out different classes and signed up for online classes on YogaGlo so I could do more yoga at home.

I made a big calendar with all the different resolutions set out on it at the start of the year and I stuck it up in my office. All year long I would look at it to see what was coming up or maybe what I had accidentally skipped (oops!). Sometimes I would even get really excited about it - like the month that was all about culture where I got to book tickets to see lots of different plays, bands, talks etc that were coming up.

It wasn't a total success - some resolutions got pretty much ignored - but it was definitely better than my attempts in previous years. And I kept doing things all year long so it was a far more achievable and balanced than the usual approach.

And this year, I am doing it again! Here is what I have got so far: 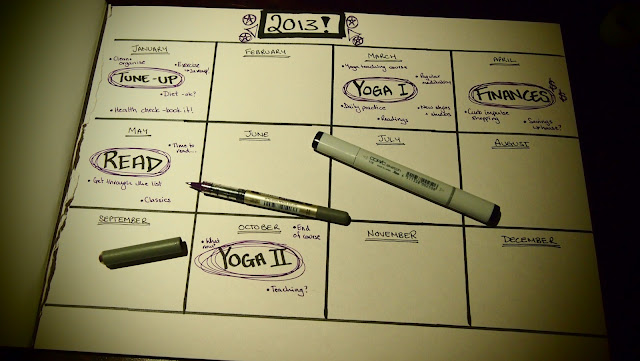 It is going to be a HUGE yoga year for me as I am starting my teacher training - so it gets TWO months dedicated to it.

The "finance" month is part self-imposed and part husband-imposed. Apparently I buy too many clothes. I mean, really! While I am not conceding the point, I do think that I should start planning my expenses better and maybe we could start saving for... something. I don't know. Husband mentioned an investment property but I am thinking a Chanel LBJ (little black jacket for those not in the know).

Either way, April should be... interesting.

You make me smile :) I like the idea of splitting up your resolutions by month as well.

(That way, you only need to worry about your finances for a month, after which you can...BUY ALL THE CLOTHES!! Tee hee!)