Getting older and more awesomer

Soooooooo it was my birthday last week! I turned 33. Thirty. Three.

The fact that I can write that without needing to breathe into a paper bag actually shows considerable growth on my behalf.

My birthday, and the focus that it throws on my ageing self, has brought me varying degrees of distress each year since I turned 20. Back then, I was having conniptions over the fact that, as I would no longer be a teen, I could no longer blame my many "issues" on "teenage angst". I felt a great deal of pressure to grow the hell up. It was awful.

And, to be honest, all of my birthday woes since then have all kind of been due to the same thing - this idea that I needed to sort myself out already - that should be more together than I was. And also because I really didn't feel as old as my age suggested I should be. Even at 30, I was still feeling like a 16 year old - but a 16 year old who only had a limited amount of time before turning into a boring old fart.

Well, this year, I though "sod that!"

I mean, sure - I am getting on a bit. I have a serious, dull job. I have a mortgage. And I got really excited last month when I bought a Magimix for the kitchen.

But that doesn't mean that I have to turn into a boring person. And I haven't.

What I am realising now is that what I have gained over all these years is a better sense of who I am and what I like. And I really don't feel the need to subscribe to whatever others might think someone of my age, my gender, my profession etc should be like. I am, after years of feeling like and odd, awkward little misfit, feeling very comfortable with just being me. And that means being comfortable with my age too.

And it was with this renewed sense of self and not caring what people thought anymore that I decided that what I really wanted for my birthday was the same thing I have wanted since I was a wee little kid, but never had the guts to get - a skateboard! 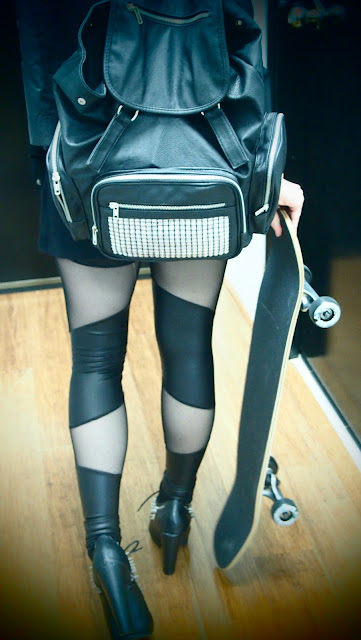 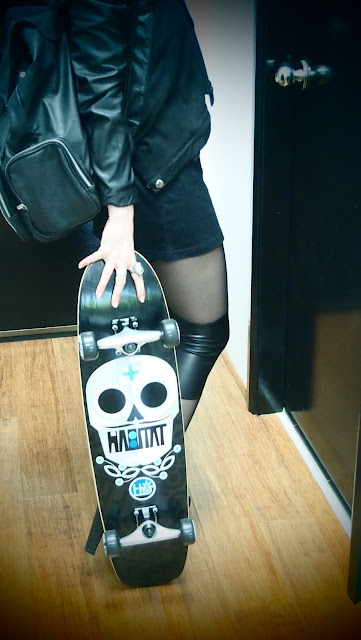 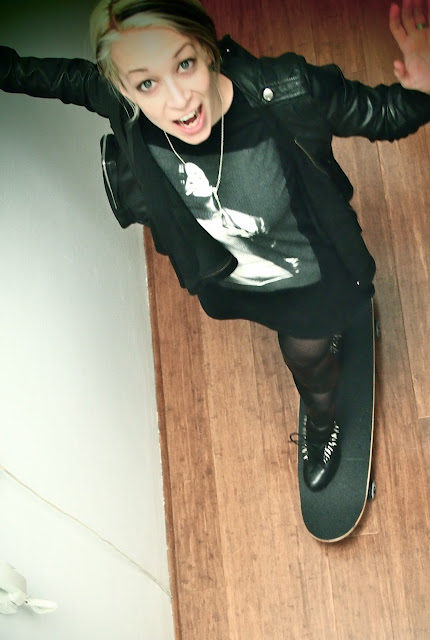 And it makes me ridiculously happy!! When I tell people that I got a skateboard for my birthday, they either think it is the best thing ever or they think I am insane. Some of the crueler ones like to remind me that it is much easier to break bones "at my age'. I choose to ignore those people though.

I can't do much more than ride up and down the quiet, flat streets of my hood at the moment but it is a lot of fun. And it is nice to learn something new. Even if that something new could potentially result in stitches or a neck brace. YOLO bitches!!!!

The backpack in the above pics was also a birthday present (from me to me) - it is Deena & Ozzy and I got it from Urban Outfitters.  Ditto the shoes (also Deena & Ozzy) Did you know Urban Outfitters deliver to Australia for free for purchases over $50? Cos they totally do!!!!

My lovely husband also surprised me with this very cool, very goth and very posh Pasotti umbrella with skull handle. 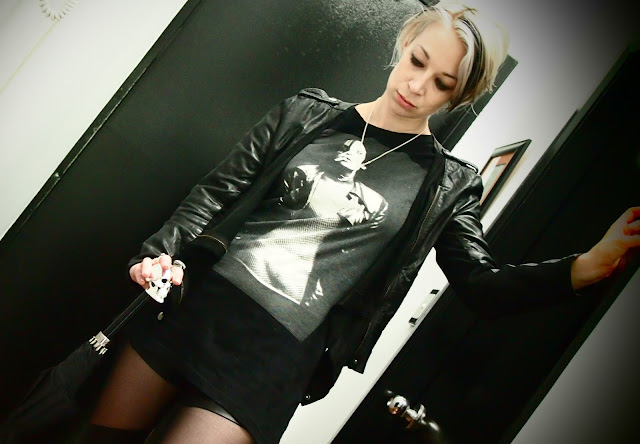 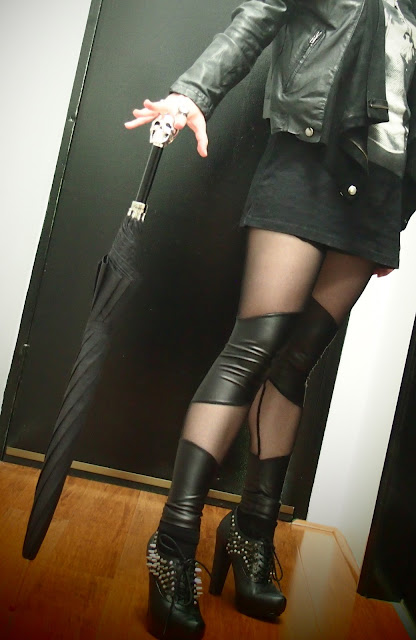 He also bought me this pretty sparrow foot Deadly Ponies necklace - because he is lovely. 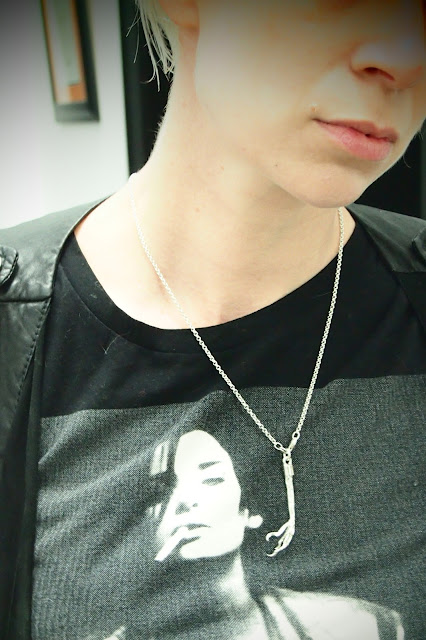 My birthday was totally rad.

And in addition to getting a crap load of awesome presents, one of my lovely co-workers made me vegan cupcakes that tasted like heaven doused in cinnamon. And I went and saw the final Twilight movies with three of my favourite people. Because I am 33 and I also happen to be Team Edward. Deal with it.

Ah - so Halloween is over for another year.

The masses have had their annual, spooky fun wearing dark lipstick, black nail polish, black lace, studs, faux leather, rubber etc etc and now it will once again be something that only the gothy-punky subcultures like to play with.

Because the kids are not just getting all vampy by wearing "Team Edward" t-shirts anymore. Cheap and cheerful retailers like TopShop, Urban Outfitters, Dangerfield and ASOS are just brimming with goth-inspired looks (for example, you can buy this bondage-style studded leather harness from TopShop right now for about $50).

And fashionistas have been having an on-again off-again relationship with dark lipstick and black nail polish for the last few years. The second a designer has a line sprinkled with lace, blood red velvet or dominatrix-style leather or a stylish new, dark movie comes out (hello "Girl With The Dragon Tattoo"), goth comes back on the fashion radar and everyone wants in on it.

Stories like this one recently post on Stylelist.com, "Hollywood Gone Goth!", are now pretty standard.  And then there is Scarlett Johansson's recent look on the cover of W Magazine's November anniversary issue:

Hmm - I thought everyone looked better with paler skin and darker hair - but apparently not. Ew, ScarJo! Just, ew. The jewellery looks photoshopped on or something. Actually - the whole look appears to have been photoshopped on to her face. Not good.

And even though I was asked today whether the black stripe in my hair was something that I had done just for Halloween, a lot of the things I wear at the moment no longer seem to be particularly creepy or counterculture and are actually kind of on-trend - even *shudder* mainstream.

I mean, as I pointed out in my last post, I basically have the same look as Miley Cyrus does right now. I can hardly pretend that my look is hardcore anymore, now can I?

A long time ago, I would probably lump my look under ever increasing umbrella of "alternative" rather than trying to fit it into a particular subculture. But nowadays - given the current desire for, and access to, fast fashion that lets you quickly pick up and drop any look you could possibly dream up - alternative to what exactly?

So does this appropriation of gothic fashion by the mainstream freak me out? Does it piss me off?

While it may have been a pre-occupation of mine when I was a teenager to look or dress in a way that would make me stand out or, better yet, freak people out, these days I am just super happy about how ridiculously easy for me to buy clothes that I like now - and without even having to step foot in a fetish store!

Seriously, check out this sweet looking rubber and mesh leggings that I nabbed from ASOS.com for about $35. 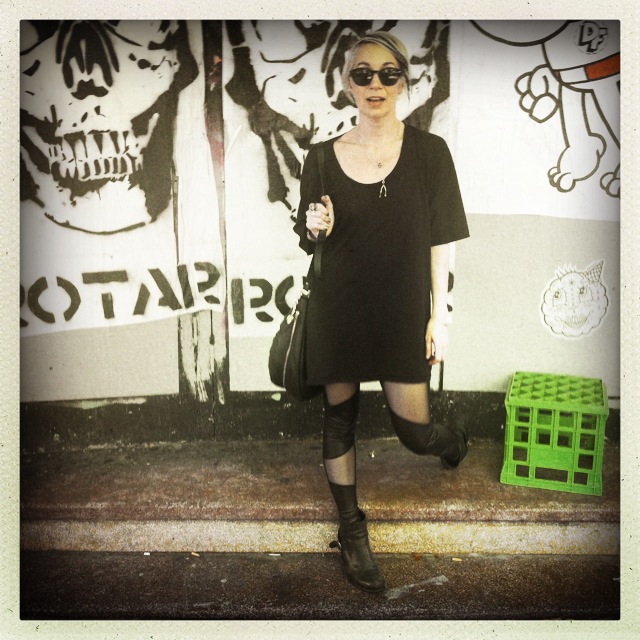 How can I complain?

Ok. So it does piss me off a little bit when I see kids wearing band t-shirts when you can be pretty damn sure they NEVER actually listen to the band (like the many Ramones or Nirvana shirts that you see on 14 year old girls at the moment). But even then, if there is a chance that opens up a few of their lives to some of the best music ever written, it is probably for the greater good of man kind.
Posted by Emma M at 9:59 PM 3 comments: