I was so inspired by yesterday's post, that I decided to go all out today. I think I covered pretty much every 90s trend in one outfit. 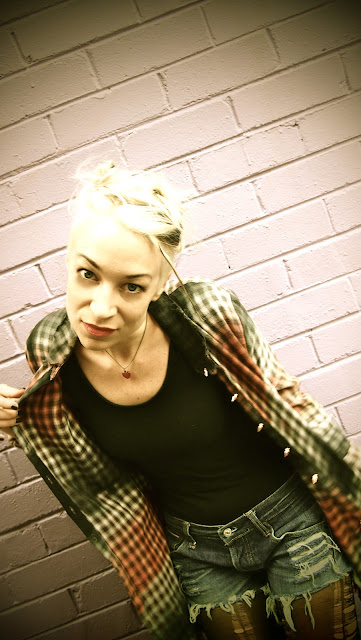 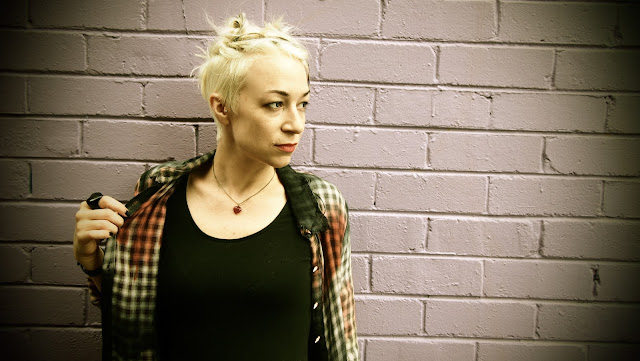 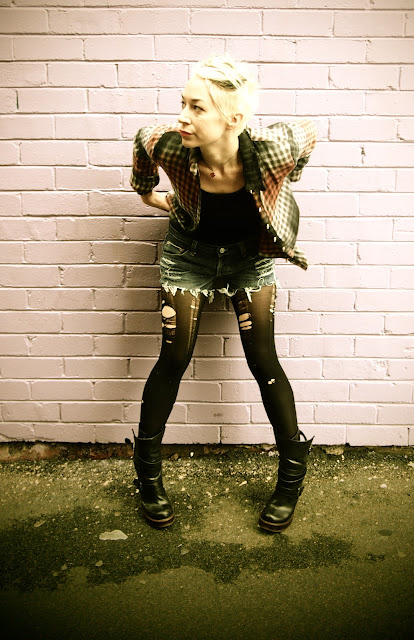 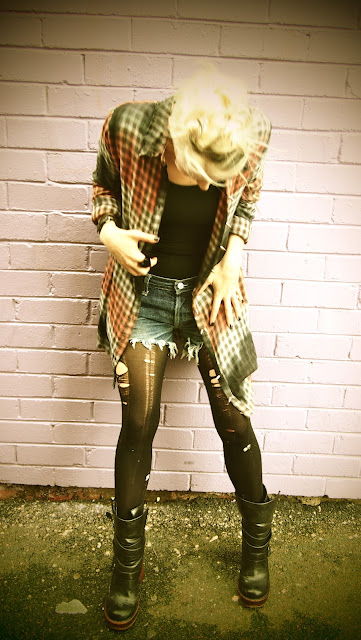 Flannel shirt: Stylestalker
Bodysuit: Mink Pink
Denim shorts: Levis 501s cutoff and shredded to perfection
Tights: Ambra opaques - also shredded to perfection :)
Platform boots: Zigi (would have been better if they were my old cherry Docs though)
Glass heart-shaped pendant: Valley markets in Brisbane (the lady who sold it to me told me it was genuine ruby - pretty good buy for $5 then!!!)
Wooden heart-shaped ring: Dangerfield
Lips: Revlon Just Bitten Kissable Balm Stain in Adore
Nails: OPI Gelcolor in Light My Sapphire

I must admit though that I pre-empted the weather a bit this morning. Just because it is raining and overcast does not mean that Sydney in February is going to feel like Seattle. Maybe I should just stand in front of a fridge for a while?

Anyhoo, I am signing off now so I can listen to Dinosaur Jr, Sonic Youth and Babes in Toyland and dream of a better time. A time when we were all bored, apathetic and complained about the banality of mainstream culture.

Well - at least the music was better then, right?

When it first started, I must admit I was a little confused. How can there be a revival already? It was only the 90s a few years ago!

But that's not true, is it? It was a long time ago. So long ago, that there are now interns at my firm who were actually born in the 90s. Seriously. What. The. Hell.

And as is the case with all these retro trends, it is being embraced most enthusiastically by those who are too young to remember what it was all about the first time. And so it is that you get tragic events like the following occurring:

As if Kurt doesn't have enough crap to disappoint him posthumously, now he has a generation of kids wearing his t-shirts without any clue as to who he actually is. Joy.

But while I have been a tad cynical about the whole thing, it occurred to me today as I tried on a black, crushed stretch velvet, scoop-neck dress that would go perfect with a pair of 12 hole cherry Docs - maybe this isn't all bad. I mean, I fricking LOVED the 90s. Why not fully embrace them again?

Except this time, I know better! And also, thanks to the interwebs and the fact that I actually have money this time around, I will be able to do it better. No more op-shop grandpa pants that have the alluring smell of pee and mothballs. No more cardigans that are way too big for me (usually because they were my dad's). No more blotting my red shiny lipstick with brown eyeshadow to get the perfect rusty matt shade, which, in all honesty, looked nothing like it was actually from the Poppy lipstick range. No more squeezing into kids t-shirts to get that shrunken look.

Now, I can just spend the cashola on 90s inspired gear that actually looks good!

Not that all 90s gear was cute, right Angela Chase?

How did she manage to snare Jordan Catalano in that get up, amiright?

Also, not all the new 90s inspired clothes have improved things - just take a squizz at some of the checkered abominations in the Dries Van Noten Spring 2013 show:

I am going to have to rely on my fave 90s style icons for inspiration - but update the looks to make them more relevant/less ugly.

Many people have many opinions about Courtney but personally I adore her. And while she doesn't always hit the mark fashion-wise, she has these moments of truly inspired style perfection. Especially back in the 90s when she was more rock-goddess and less crazy-lady.

I particularly love her makeup. Her lipstick was the greatest. I am going to be using Revlon's Just Bitten Kissable Balm Stain in Adore to get a similar shade with great staying power but that also makes my lips feel good. Such a strong lip looks great against peroxide, white hair too.

What I won't be doing though is the overly cutesy dresses. I think they worked in an ironic way back in the days of the Riot Grrls but don't think it works as well anymore. Especially not on anyone over 20. Which rules me out big time.

I don't know what has really happened with Winona recently. I mean, she was kind of cool in Black Swan and even as Spock's mum in Star Trek, but she still hasn't managed to get anywhere near her former glory.

And man - was she glorious! In the 90s, Winona was basically the queen of all things awesome. I mean, she made Kate Moss seem like a sad, runners-up prize - no easy feat! Absolutely no one even came close to her.


I would wear all of these looks today exactly as they are. The only thing I would do differently is talk Johnny out of the yellow suit.

She also makes me miss having black hair. Sadly it doesn't suit my colouring anymore quite like it did Winona. Although, even now, she can't really pull off having it that dark. As you get older, having pitch-black hair tends to cast unforgiving shadows over your face, making it look even more sallow and tired than it is. Which is probably why I have chosen to go the complete opposite with platinum.

I also very much so want the jacket in the last photo. Very cool.

It was actually harder than I anticipated to find photos of Drew from the 90s with all her clothes on. She tended to get photographed in her bra A LOT.

But when she did wear clothes, she looked super-duper cute. I especially love how she styled her Levis 501 - back then we used to wear actual boys jeans though rather than the "boyfriend" girls jeans that you can get now.

The belt was usually a necessity rather than an accessory - my 501s used to fall down if I didn't wear a belt they were so baggy. Now that isn't such a big issue because the boyfriend style jeans are made to look baggy but actually fit you where it counts. Which is nice. Current/Elliott do some really great boyfriend style jeans - you can buy them via shopbop.com. Wear them with a pair of beat up Converse Chuck Taylors or One Stars or even with a pair of Docs.

I am definitely loving the midriff tops - and they are everywhere this season. I figure you never know how long you have to show your belly off like that before it looks all mushy - so I am going to wear them while I can. I especially like the stripy one in the second photo.

And I have always loved the white singlet with jeans or cut-off jean shorts. Simple but always looks chic. I probably look chicer in my head than in reality actually - in my head I look like Cindy Crawford in that old Pepsi advert. What is life without a healthy dose of delusion, hmm?

One thing I will NOT be doing again though is copying Drew's razor thin eyebrows in the second photo. Check out this old blog post if you want to see what happened the first time.

In terms of style, she is probably best known for that swan dress that she wore to the Oscars. But when she started her solo career in the early 90s, her style was quirky-cute and surprisingly easy to emulate.


Slip dresses, fuzzy jumpers, acid bright colours and asian influences - all still chic and all show just a little bit of quirk without having to go the full swan.

The messy hair knots are still cute too and have been seen in recent fashion campaigns, like DKNY for Opening Ceremony:

I also LOVE Bjork's eyebrows. I wish I had paid more attention to them in the 90s instead of Drew's. Dammit.

Ok, so that is the direction I will be taking. Now all I need to do is drop some serious cashola. And when it comes to the 90s revival, no one is doing better than Urban Outfitters. Seriously. Just check out their Spring Lookbook. It is almost scary.