So I would first like to acknowledge up front that I totally get that festivals are really the domain of the young - the awful, fearless, tanned, lean, non-working, long-haired young. And yes, maybe the following are merely the foolish ramblings of a bitter, no longer with it, 30-something who, a few times a year, likes to try to recapture her raging youth by seeing some bands in a field with about 50-odd thousands teens who are all high on life and various substances. 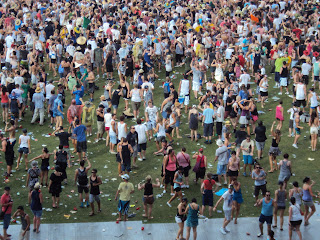 And maybe I should just enjoy the bloody things rather than whinging about a) the fact that the tickets are SO expensive now; b) the line-up being crap and “not as good as they used to be” (you know, when you could see the likes of The Smashing Pumpkins, Soundgarden, Bjork , Primus, The Ramones and the Breeders for, like, $40); how fricking YOUNG everyone seems to be; and d) how ridiculously and inappropriately all of these kids dress.
I get all of that. But I would still like to have a whinge, if you don’t mind – particularly in relation to the last point.
Honestly, though, what the hell are the kids at festivals thinking when they get dressed? I mean, teenagers look pretty stupid most of time – it is like part of the job description – but the level of stupidity seems to be cranked up to 10 at these events.
There is this whole scene around festival dressing. The fashion magazines do these spreads on “Summer Festival Fashion” or some such crap so that all the girls who are heading to a festival know what to wear. I assume that these girls are only attending because their boyf or bff happens to actually give a crap about the bands and they are just tagging along to look cool by association or because they are being forced to – thus causing the dilemma that has seen them running to Cosmo or, if they are mildly cool in a predictable sort of way, Yen in order to work out what to wear to the Big Day Out.
As far as I can tell, the writers of these articles have never actually been to a festival. Or, if they have, they stayed in one spot all day and had access to some kind of magical toilet, unavailable to the rest of the heaving, sweaty mass, with a mirror, great lighting and a hairdryer as well as a never ending supply of super-soft toilet paper. For the rest of us, however, these misguided lists of the latest “boho” designer wear will only come in handy when you do, inevitably, get stuck in a stinky port-a-loo at the festival which ran out of toilet paper sometime around the second act.
Not only are the clothing and accessories that they suggest usually impractical, they also tend to be stupidly expensive.  Burberry gumboots anyone? Or how about a fringed sass+bide singlet? This doesn’t really take into account the fact that you will end up ripping off the boots because they make your feet all sweaty in the extreme heat and that you may decide, in your infinite, alcohol-impaired wisdom, to discard the singlet somewhere along the way too.
I always to tend to try to dress for festivals in way that makes the most sense in light of what intend to get up to on the day. If I am likely to be in a mosh-y mood, I will wear a t-shirt (shoulder coverage to stop me getting burnt and I usually pick a fitted one so it is less likely to get ripped or let some random’s hands up it), jeans (old ones so that it doesn’t bother me if I get blood or vomit on them and maybe with a belt if I think there is a risk that they could get pulled down) and docs or something similar (boots are necessary so I don’t lose my shoes and it doesn’t hurt as much when my feet get trampled). If I am unlikely to go in the mosh pit, then I might wear a skirt or shorts but it is never anything too fancy.
But this is just what works for me - I don’t necessarily think it is what everyone should be wearing. So instead of coming up with my own list of things to wear to a festival, I thought I would come up with a list of things NOT to wear – all of which are based on things that I have seen girls actually wearing, usually with tragic, tragic results.
Otherwise, go nuts and have fun.
Posted by Emma M at 10:52 PM