Now that 2010 is so last year, I thought it was a good time for some reflection on what went down over the past 12 months.
One of themes that ran through 2010 for me was breaking rules – well, my own fashion rules anyway.
Most of these rules came about as a result of some hard lessons that I learnt in my youth following some truly heinous fashion faux pas. After humiliating myself by slavishly following one stupid trend after another, I told myself that, no matter what fashion dictates, I would not make those same mistakes again.
Well, apparently that was a big, fat lie.
Here is what got a second look-in in 2010 despite my better judgement:
Rule: Midriff tops are silly and should be avoided
I used to be obsessed with midriff tops. I was devoted to them from the late 80s right through to the late 90s. When I was 8 or 9 I wore a purple Dannii midriff t-shirt with an aqua rah-rah skirt and crimped hair to school dances. Later, when I was around 15, I would confuse the hell out of my parents by pairing a knitted midriff jumper with a big vintage jacket and baggy, ripped Levis in the middle of Winter – no way was the cold weather going to stop me from baring my belly!
Then trends seemed to move away from tiny tops and, as my personal obsession also waned, I decided that I would never go back to midriffs again.
But now they are back! The fact that they are currently in fashion isn’t the real reason why I bought one a few months ago. Nope. It is the fact that I really wanted to show my new tattoo off! 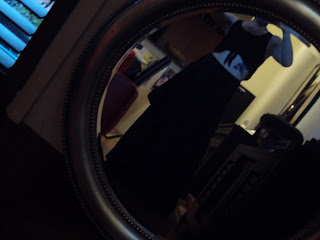 *sigh* When, exactly, am I going to grow up? At least I have made the decision to only wear the top with high-waisted skirts and pants. The ol’ belly-button will remain covered. Well, for the time being at least...
Rule:  Never wear white leather shoes
When I was about 10 I had these fab white leather mini-heels. I used to wear them with white shorts (now that is one mistake I really won’t be making again!) and thought they were the hottest thing ever. I got over that one pretty quickly though and they were never replaced.
The white leather shoes that I bought this year aren’t really the same thing but there is no denying their white-ness. 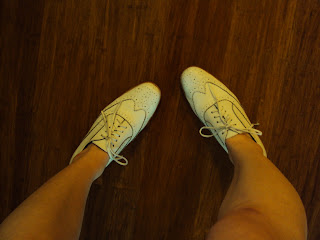 Screw it – I love them!
Rule:  Bodysuits – just say no!
I noticed bodysuits cropping up again in shops a year or so ago. I recoiled in terror when I saw them on the rack – memories of uncomfortable press-studs that made going to the bathroom a nightmare came flooding back to me and I made a vow not to be seen dead in one this time around.
But then I found one last year that kind of reminded me of something a ballerina would wear and it had a really cool low-scooped back. I thought it would be so good for layering too because it wouldn’t ride up. The next thing I knew, I was at the cash register and another rule bit the dust. 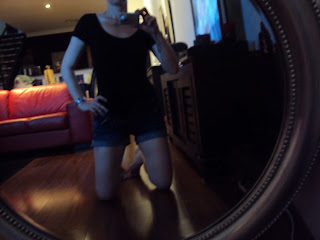 I also enjoy wearing it around the house over black opaques and pretending I am Edie Sedgwick.
Rule: Unless you are actually Dutch, why would you wear clogs?
Ah, clogs! I had this hideous pair of brown leather clogs in the early/mid 90s and I mistakenly thought they went with absolutely EVERYTHING that I owned. It also happened to be at the time that I was carrying a lot of extra puppy-fat so they kind of made me look like a piggy running around on these little wooden trotters. Not pretty. Regrettably, I was as unaware of my weight issues as I was about the hideousness of those clogs so I would strut around like I was Kate Moss or something. It is traumatising just for me to think about it.
So how the hell did I end up buying these little fellas last month? 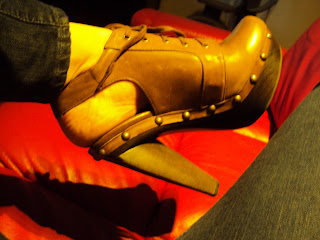 I have no idea. I mean, they aren’t exactly clogs but they are certainly of the clog-family. They are really high too and quite unstable so I kind of wobble on them a bit like a newborn giraffe. But I thought they were hot when I saw them and I still kinda do. I have only worn them out once though and I ended up falling over in quite an ungracious way in front of a bunch people and skinned one of my knees. Tres chic!
Anyways, happy New Year you guys! One of my resolutions is to write more so I will hopefully be posting more often. Well - that is the plan. We'll see...
xx
Posted by Emma M at 9:03 PM