Quality or quantity? I want both!

I know I have mentioned my shopping addiction before. It is not something I have managed to get under control. Mostly because I don't want to.

Husband makes murmurings now and then about me "always having shopping bags" or "running out of space" but I don't take him too seriously. The truth is, buying pretty, new things makes me happy. And he likes me to be happy. So, I shop. Win-win.

Well, mostly win for me but still - win.

But because I don't actually like to spend heaps of money, I have got into the bad habit of buying lots of cute, cheap things. Mostly online, with my biggest enablers being ASOS and Urban Outfitters. I basically sit on the couch and binge on junk fashion. Sweet, sweet, junky fashion.

Which is fine except that a lot of it only gets worn a few times before it starts not to look so great anymore. Or I buy it on sale but they didn't have my actual size so I bought one size up or down and it doesn't actually fit me that well - so it gets maybe one trip to the outside world before being retired to the back of the wardrobe.

My shopping isn't just done online though - I also like to buy stuff in my lunch hour, especially if there are sales or if I can just grab a couple of plain tanks or t-shirts. (Because you can't have enough basics, right? Well - IT TURNS OUT YOU ACTUALLY CAN!)

But this is starting to get to me. Because I also like to think I am somewhat of an environmentalist. Binge shopping on stuff I only wear a few times is totally contrary to this. Does this make me a mysterious woman, full of contradictions and impossible to define? Hmmmm - no, pretty sure it just makes me full of shit.

I had to do something about this.  And do you know how I decided to fix it?

Yeah. Seriously. But wait - there was some kind of logic behind this, I swear!

I wanted to buy some pieces that were actually good quality - stuff that I could wear again and again, in beautiful fabrics, great finishes and that weren't going to go out of fashion after one season. And when I saw the Rittenhouse pop up store in Newtown, I knew I would find what I wanted.

Rittenhouse is a Sydney-based label. They use gorgeous fabrics (usually Italian or Japanese) but are all manufactured in Australia. Everything has a super-easy, casual aesthetic but the fabrics, detailing and finish make all the pieces feel special. 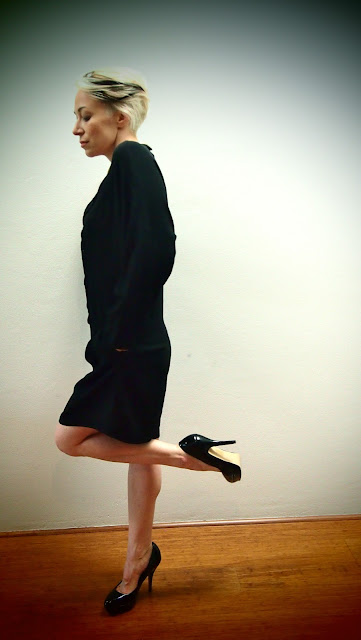 I was just going to buy this black dress. It feels gorgeous, I can wear it to work and is super comfortable. I hate most "corporate" clothes because they are SO uncomfortable - while this means I sometimes end up trying to disguise a t-shirt with a nice necklace, whenever I find something that is both comfortable and professional, I can't pass it up.

But then I also found this jumper/ top: 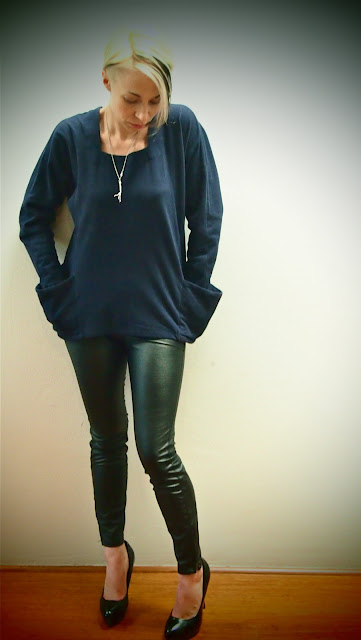 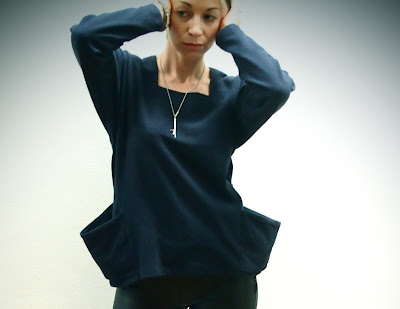 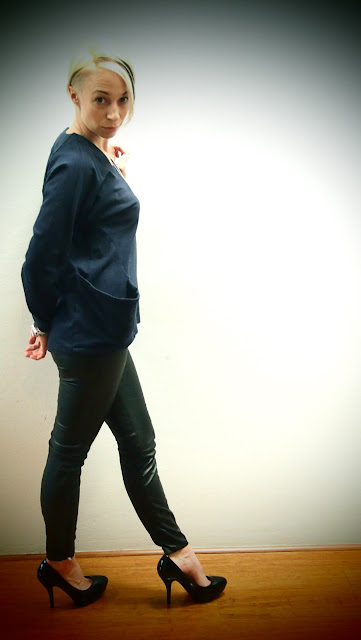 I have avoided navy for a long time because it was my school colour - so navy jumpers were an especially big "no". But the neckline and pockets on this were just too cute. Also, it was on sale - hooray! The pleather leggings, on the other hand, were a classic online purchase. $30 from Urban Outfitters! Yeah!

While I was at Rittenhouse, I also HAD to buy a tank. Not because I need any more. (Noooo - I have about a billion in fact. Mostly in black, grey and formerly-white-but-now-greyish.) But because Rittenhouse tanks and t-shirts are AMAZING. I only bought one. Which means I was very restrained and good. 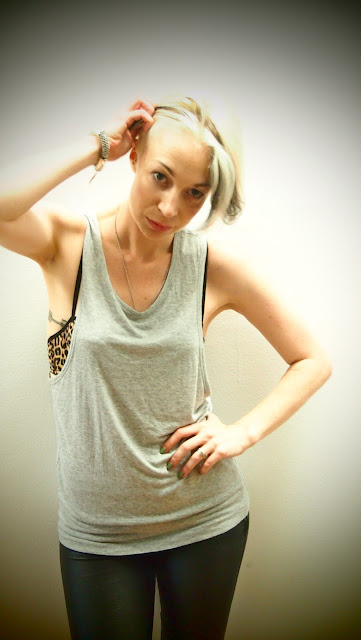 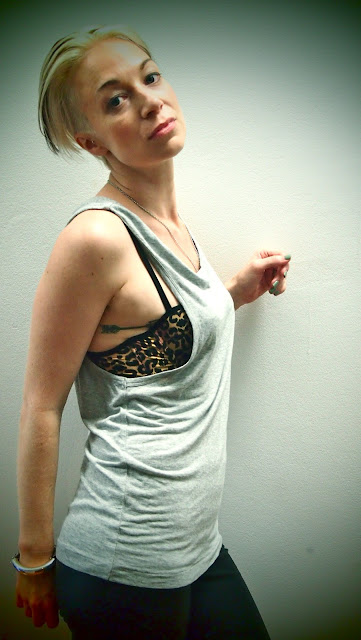 (BTW I bought the leopard print bra in the sales at Myer. It is Sass & Bide. Turns out, they make gorgeous lingerie. If only they would stop making dog-ugly leggings and harem pants and just focus on the knickers.)

And finally - I grabbed this scarf as an impulse buy on the way out. I am not normally a scarf person but this one was just so nice and I like the idea of being a scarf person. And this one adds colour to my wardrobe which is something I always intend to do but usually fail at. Also, it was on sale. Woot! 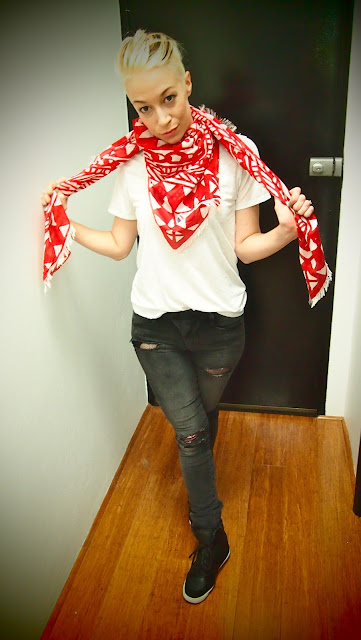 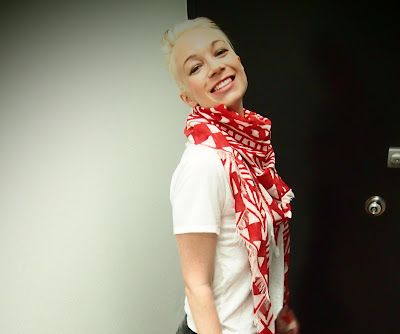 White t-shirt is one of the many I have bought from Urban Outfitters. The jeans are Joe's Jeans - I got them in a sample sale but they are probably my favouritist pair ever. The sneakers are another junk, impulse purchase from ASOS - I have actually worn them heaps though so that was a bonus because I really didn't put too much thought into them when I bought them.

All of this would be super if I hadn't gone out THE VERY NEXT DAY and bought more stuff.

In addition to the Sass and Bide bra, I also bought a cheap, junk item from TopShop. Again, in the sales. Ugh! I am so weak! 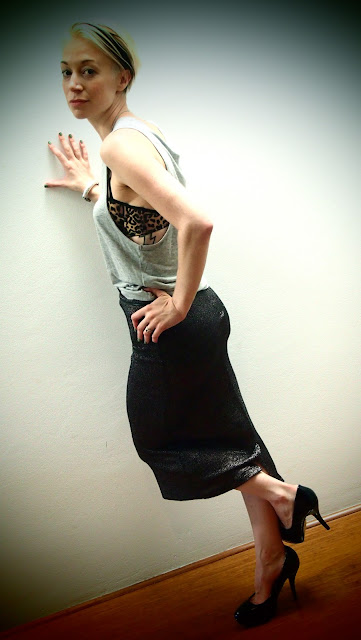 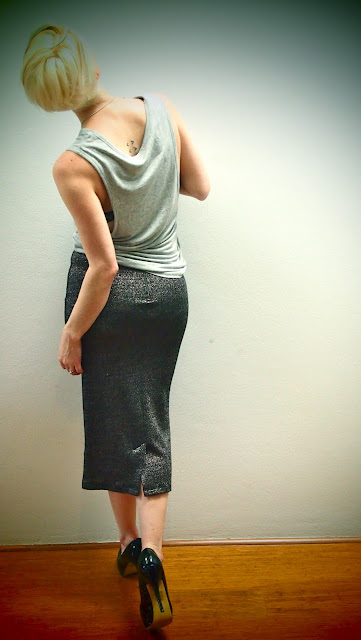 So it might be silvery and quite fitted and, husband informs me, a bit see-through. But it goes with my new tank and, let's not forget, it was $17!!!!!!

And then I bought this jacket. Which wasn't on sale. And wasn't cheap. But it is so nice and I have wanted a Chanel-looking black jacket forever. This Maison Scotch one is just the ticket. So I bought it. 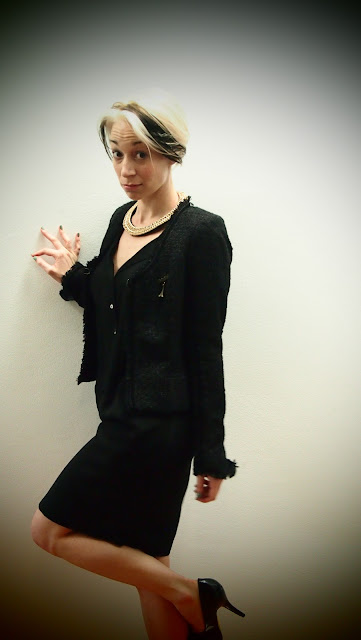 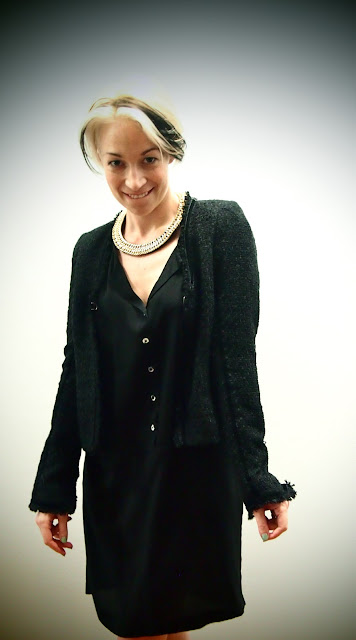 And if it isn't bad enough that I bought all these things, I then forced my husband to take photos of me as I flitted about the house trying them all on. Poor husband.

Now I just need to find somewhere to put all of this stuff...
Posted by Emma M at 8:42 PM

Love your hair lady! That little flash of black amongst the blond is just perfect x

I found this on internet and it is really very nice.
An excellent blog.
Great work!
mybkexperience