So I want to focus on the boys for a little while. More importantly, I want to point out a few things that, in my opinion, make men that I may not otherwise think much of look like a massive catch.

And the thing is, they are all so easy for any guy to do that it makes me a little jealous. I mean if I wanted to increase my own appeal to the opposite sex, according to the likes of FHM and Maxim I would probably need to get implants, get a tan, put makeup on with a spatula, grow my hair long and wear it out all the time, wear tiny outfits and quite possibly have a frontal lobotomy. (Not that I think men necessarily like dumb women. But I do think that dating the type of guy who reads FHM or Maxim would be far more bearable if a very important part of your brain was missing.)

But for a boy, they just have to follow one or more (or all!!) of these simple tips and it will make them instantly more attractive. Well, to girls like me it will anyway.

I am also going to use a case study to give you an idea how these tips work in practice! For this, I have chosen actor/model/author/student/performance artist James Franco - a man who is a little dull on his own but who really knows how to utilise props and his environment to increase his overall babe-value.

Tip 1 - Wear specs (but only if you need them)
Fact - wearing glasses, especially old-fashioned, horn-rimmed glasses or a pair of Wayfarers, will make any guy instantly more attractive. So guys, ditch your contact lenses, cancel your lasik surgery and embrace your speccy-ness!

One word of warning though - this does not work if you don't actually need to wear glasses. It will make you look like a super-mega tool, especially if the glasses don't have lenses in them at all. People can tell, you know. They will think you are sad and will start avoiding you because they want to laugh every time they make eye contact with you. This is kind of the opposite from what we are trying to achieve here.

James wore a pair of fab glasses for his recent movie "Howl" where he played beat poet, Allen Ginsberg. (Not sure if he needs to wear glasses but as he was wearing them for a role it doesn't matter if he doesn't.) The result? Intellectual hotness: 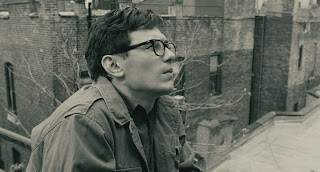 Source: www.james-franco.com
Sadly for me, my husband doesn't need to wear glasses. It is sad because I think they would really suit him. Sometimes I find myself hoping that his eyesight will start deteriorating soon so that he can start wearing them. Is that wrong?
Tip 2 - Read books
Men who read books are hot. Reading a book in public is bound to get a girl's attention. Which book they are reading is obviously very important and can be quite telling but even the least impressive title can still make a guy look a lot more attractive than he would be sans book. Of course, the bonus of reading something that is interesting and impressive is that it will make you more interesting. And, if it happens that your reading a book in public is successful in bringing a girl your way, you might actually have something to say to her that doesn't involve sport, Star Wars or World of Warcraft. Yay!
My husband was reading a book when I met him and it definitely added to his appeal. It was only later that I found out that he was just reading a Lonely Plant guide. Still, he looked hot and, evidently, what may has been a cunning ruse totally worked.
Finding men who read attractive is something that I am clearly not alone in - hence the success of the awesome blog, Hot Guys Reading Books.
James knows this. He uses it to his advantage: 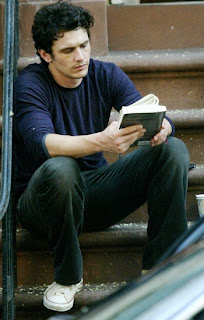 Source: www.thefablife.com
Also, in researching for this post (and by "researching" I mean scrolling through loads of photos of James Franco), I found out that James has written a book! How hot is that?
Tip 3 - Get a moggy
I know there is often a special relationship between a man and his dog. I think most women like this and find it quite attractive. Seeing a nice looking man mucking around with his dog can be very sweet (see Ryan Gosling and his dog).
But the second I find out that a guy owns a cat, I absolutely melt! It is a little more unexpected than a dog and suggests that he might be a bit sensitive - totally endearing.
It is difficult, however, to take a cat out and about with you. They will just run away if you take them outside and walking a cat on a leash will make you look a bit of a freak (but not in a good way).
So how do you let girls know that you own a cute little kitty?
Well, James took care of this dilemma by posting a pic of him with his kitties on his Twitter account. Brilliant! 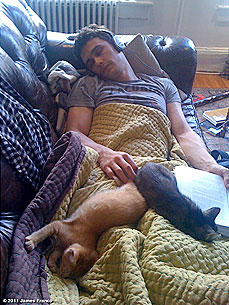 OMG - he has TWO cats!!! And a BOOK!!!  I DIE!!!!!!!!!!!!
After seeing this pic, I officially admitted James to my list "5 men that I am allowed to have an affair with without it impacting on my marriage".  He is number 4 - right after Ryan Gosling (see link above).
Tip 4 - Don't look like you give a crap
Ah this one is tough. Because you do give a crap. In fact, you give a crap very much! That is why you are pretending to read Ulysses through your prescription Wayfarer specs at your local cafe and tweeting pics of your new ball of fluff that you named "Behemoth" (to allude to the fact that you may have also read other books - tricky ones that have been translated from their original Russian!).
So how can you look like you aren't trying too hard when you really, really are? Well, stop doing all of these things at once for a start! That is only for the pros like James. Try one at a time at first and try to make them fit into your existing look. This is also why it is very important not to wear non-prescription glasses. Smacks of effort and try-hardiness.
One trick that you can learn from James is this: When a great opportunity next comes your way - maybe even a date! - try to act completely nonchalant and like it is actually kind of a pain in the ass for you do it. Don't prepare. Don't act like it is a big deal. Don't look interested. Send a couple of texts in the middle of it. Look tired/stoned. Occasionally, let your eyes roll into the back of your head.
To see how it is really done, check out James at the 2011 Oscars where he was a host. A. HOST. Of the OSCARS. You would think that he would have been totally psyched to do this gig but, if he was, he hid it well: 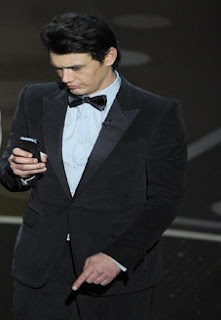 Source: http://pattygopez.buzznet.com
I don't know why it is that girls like it when guys aren't trying. Maybe it is because when guys do make a big effort, they seem too desperate and this is probably an indication that there is something very wrong with them. Also, if a guy looks like he doesn't really know how to function properly in society, he seems like a challenge or project. This irresistible to most women. They can fix you! They can teach you the importance of regular showers and basic hygiene! They can buy you new clothes! This kind of thing is like crack for most women, even if they won't admit it. I bet women are even finding Charlie Sheen more attractive after his recent melt-down. Because clearly, the only thing wrong with Charlie Sheen is the absence of a good woman. (And no - the porn stars don't count.)
So long as you don't mind losing your sense of self, you can't lose with this one. And if you become a real pro, you will actually stop caring and won't need to make any effort at all!
Win!
Posted by Emma M at 5:56 PM

So I have the glasses, because I need them when I read. I actually don't give a crap. But I don't think any of these things ever got me anywhere with a lady. Or perhaps I just didn't notice, because I didn't give a crap. That would be the nastiest irony. (well American irony).

Aw Jody - the problem is that we are talking about girls that are similar to me. And a girl like me would never be obvious. So, yeah - you probably didn't notice them.