Ugly is in the gender of the beholder 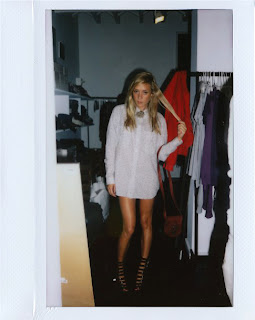 Source: www.openingceremony.us
I love Chloe Sevigny. LOVE her. I think she is swell.
One of the highlights of my recent trip to Tokyo was checking out the Opening Ceremony conceptual department store in Shibuya – 8 levels of stylish gorgeousness. And the first floor was full of racks and racks of Chloe Sevigny’s designs – loads of cute little numbers all guaranteed to make you look as edgy and fashion-forward as Chloe – so long as you are willing to part with some serious cash. (Which, BTW, I wasn’t so I left empty-handed but my head was full of dreams and plans to create similar outfits from bits and pieces that I will find in op shops – like a modern-day Andie from Pretty in Pink.)
After an hour or so of wandering around in awe, my husband could no longer feign even the slightest bit of interest and his boredom started to get the better of him. To shush his protests, I promised him we could leave as soon as I have had one last look at the Chloe Sevigny line again. But, amazingly, this did little to stop his whining.
Inside Opening Ceremony store - Shibuya 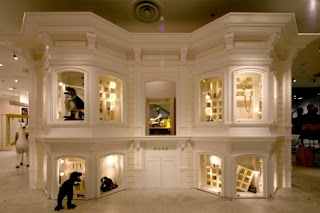 Source: www.openingceremony.us
Him: “What? Why? How can it be so important that you need to look at it twice if you aren’t actually going to be buying anything?”
Me: “Because she is so awesome and fabulous and I want to look just like her.”
Him: “Who? That girl?” [points at poster and makes face like he is smelling something nasty]
Me: “Yes - her! She is gorgeous!”
Husband: “Um, no. Actually the opposite of that. The other thing. Um. Minging? Who is she anyway?”
Me: “What? Are you kidding? She was in Kids.” [blank face] “Big Love.” [blank face] “Boys Don’t Cry.” [possibly even blanker face] “Ummmmmm – oh! American Psycho! Jean the secretary.”
Husband: “Oh right. Meh. Still. Gross. Can we go now?”
Given that I wasn’t going to buy anything anyway and knowing that he has a limited shopping capacity, I decided to cut my losses. But I was still a bit surprised that he didn’t think Chloe was da bomb. I thought he liked edgy, quirky girls. And if he doesn’t – well – I have been playing this thing all wrong!
But then I remembered Sarah Jessica Parker and it all started to make sense.
I have had many disagreements with the husband over SJP. We will be watching a movie that she is in and she will do something funny and I will say something fairly innocuous like, “She is so cute!” and then it is on.  I mean, seriously, have you ever tried to talk to a guy about Sarah Jessica Parker and even dared to suggest that she is cute or even just mildly attractive? It makes them go insane! It is one of those conversations where neither party can see the other’s side.
To most women, SJP is somewhat of a style-icon. She takes fashion risks, wears fantastic labels, she looks great pretty much all the time. I mean, ok, sure she has a big-ish nose and slightly larger head to body ratio than is usually considered normal – but still, she rocks what she’s got and girls recognise and admire her for that.
Men, on the other hand, see one thing – a giant, horse-like head. And they can’t see past it. In fact, a few years ago, Maxim magazine named her “Un-sexiest Woman Alive”. (It also described Madonna as “Willem Dafoe with hot flashes” which is actually pretty funny.) The Family Guy has also taken a few, admittedly funny, shots at her over the years. It seems as though it is universally accepted amongst men that she is so thoroughly unattractive that any suggestion to the contrary must be aggressively refuted (well, I am guessing that Matthew Broderick isn’t in that camp but otherwise the theory seems to hold). Men are so affronted by the fact that she was elevated to being a woman that other women want to be like thanks to Sex and the City that it may just have broken their brains a little bit.
My husband actually forwarded a link to Maxim’s list of unattractive women when it came out with a smug note saying, “See? I told you!”
Whatevs. I don’t even necessarily think that SJP is beautiful. I think she is interesting-looking and some of the roles she plays are funny. (Clearly I am NOT referring to either of the SATC movies here or that one with Hugh Grant in it. But she was totes cute in the The Family Stone. Also, I loved her in Ed Wood and Smart People. And don’t even get me started on Flight of the Navigator!)
And funny is cute. And cute is appealing. No need to get all hysterical about it and formulate some vile list in an attempt to prove women who think the same are wrong!
SJP in Flight of the Navigator 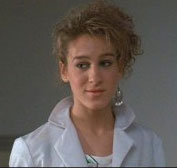 Source: www.cinemablend.com
What I think what guys don’t get about the appeal of celebrities like SJP and Chloe is the fact that they have done amazing things with what they have been handed. So they weren’t genetic freaks with natural, conventionally beautiful faces like Natalie Portman or Angelina Jolie or Olivia Wilde even. At least they haven’t relied on plastic surgery to change their faces into something that is considered more appealing to the masses in an attempt to secure more work (which doesn’t really seem to work anyway – I mean just look at Ashley Simpson, Megan Fox and *shudder* Heidi Montag). Instead, they play on their innate sense of style, cute personalities, talent and a fair amount of chutzpah. And that is pretty hot.
So I am not even going to bother trying to convince my husband that Chloe is awesome because it is useless. Just like it is useless trying to explain why I think Gary Oldman is absolutely gorgeous. And maybe – just maybe – he will stop trying to convince me how hot Keira Knightly is. (In my opinion, she only really looks attractive when her mouth is closed and more closely resembles a praying mantas than a woman. Ugh. I don’t get Scarlett Johansson either – she just looks like a blow-up doll.)
Maybe I should make a list....
Posted by Emma M at 2:58 PM

Gem, I'm with you on Chloe. She's gorgeous and quirky and rocks her own style. However I'm with Alan re SJP - gorgeous yes in Girls Just Wanna Have Fun and maybe the first couple of seasons of SATC but she lost me a few years ago. She needs a good feed, needs to put the weights down and realise that because it clashes, doesn't mean it's fashion. Guess that makes the score 1 all! Bec

SJP is just a bit ordinary... I would prefer any of other women on that silly show.