Stuck in a time warp

I got this really lovely style book a few Christmases ago. It covers different style icons from over the decades - from the 1920s to the 2000s. When I started to pour over the pages of this gorgeous book, I wondered which decade I most identified with style-wise. I was kind of thinking it would be the 40s or 50s. All pale skin, dark lips and carefully put-together outfits. The 60s icons were gorgeous, particularly the photos of Anna Karina, Shirley MacLaine and Edie. But the big names from the 70s and 80s were, for the most part, too gauche for me personally and I had never really been that drawn to them.

Then - the 90s! Each of the icons in there had spoken to me at some point in my life and had been an object of my adoration. I had been fascinated and inspired by them and can pinpoint outfits in my wardrobe - both from when I was battling through my teens in the 90s and the things that I wear now - that have been directly influenced by every one of the women on those pages.

Initially, this really disappointed me. I always liked to think that I was a bit more interesting than this - being stylistically stuck in the decade that I grew up in does not really make me seem very sophisticated or chic. And isn't this how the women who now wear mum-jeans started out?

It isn't just the clothes either. I have been similarly disheartened with the way 90s music keeps drawing me back in. One minute, I think everything is fine - I am buying new stuff from Lykke Li, James Blake, Bat For Lashes - totally down with the kids and still very relevant. But then, BAM! Without even noticing, I am getting all nostalgic and have scrolled my ipod down to Faith No More or Hole or something. Familiar, comforting and soul-destroying all at the same time.

It reminds me of what Travis said in Clueless:


"The way I feel about the Rolling Stones is the way my kids are going to feel about Nine Inch Nails, so I really shouldn't torment my Mom anymore, huh?"


I might not have kids, but I am still feeling tormented.

Don't get me wrong - I still maintain that, much like 90s music was freaking awesome, the 90s babes were totally hot. Maybe even hotter than the babes of today (with the possible exception of Olivia Wilde who, I am convinced, is some kind of alien - a normal human cannot be that pretty!). And their outfits are still cute and I would wear any one of them right now. In fact, I do still wear very similar ones quite a lot.

My favourite, most coveted look back in the 90s was Liv Tyler's. She was like some kind of 90s uber-goddess. I don't know a single boy at the time who didn't have lusty feelings for her after watching Empire Records or Stealing Beauty. So naturally, I wanted to be just like her!


And as you can see from Ms Crazy-pout below, I went to great lengths to try to emulate her (and kind of ended looking more like Alanis Morrisette which was NOT what I wanted): 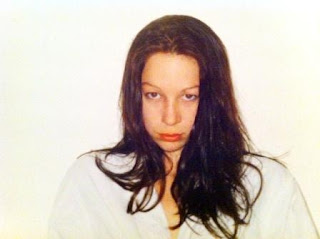 The most tragic part is I was also still doing the whole Drew Barrymore eyebrows thing at the same time. Ugh. UGH! I wouldn't have even been able to hook up with Rex Manning with those things on my face! And see how sullen I looked? That is because I had issues. And was misunderstood. And read too much Emily Dickinson and listened to too much Tori Amos and Fiona Apple. Also, it is because Liv was always sulky in Stealing Beauty and I thought it looked cool.
Anyway, it wasn't just about Liv. Other lovelies from that time that I wanted to be just like included:
Brenda Walsh aka Shannen Doherty
An early style-icon of mine, I loved her look and her attitude. And hated Kelly Taylor's guts (and most blondes) as a consequence.
Lisa Loeb
Geek-chic at its finest. I actually ordered a dress off asos.com the other day because it reminded me of this one. I cannot WAIT until it arrives.
Angela Chase aka Clare Danes
Angela Chase kind of acted out my high school life on tv in an awkward, embarrassing way. And while I didn't get to see the show when I was in high school (it didn't air in Australia until much later), the magazine photos and clips that I had seen fascinated me because she was a similar age to me and yet somehow seemed so cool. Black leggings, baggy dresses, flannel shirts and cherry-red hair soon followed.
Samantha Mathis
Samantha Mathis was always so cool and always around the cutest boys. Also, as you may have noticed, I have always been drawn to anyone in Hollywood with super-pale skin as they seemed like their looks were more accessible to me. (*cough* deluded *cough*)
Bridget Fonda
So cute, tiny and stylish. This is definitely a look that I still like to rock. Even the hat (much to my husband's chagrin).
Courtney Love
I still wear slip dresses with boots and big coats. And, while others think she is just bat-shit crazy, I think she is a style-icon to this day.
So after flicking through this book, I decided to embrace the 90s look and how I have interpreted and re-interpreted it over the years instead of being embarrassed about being stuck in my past. Plus, it is retro now. Technically, I am ahead of the game.
Posted by Emma M at 10:36 PM

lisa loeb is my favourite of the 90s chicks you listed. even my mum knew all the words to 'stay' because i insisted on having it on repeat all the time!

This post is fantastic. To me, that (hilarious) photo of you is more a grumpy version of Angelina from Girl, Interrupted than anything else...(wrong colour hair, I know...but you had Angelina's real life hair colour, so in that sense you look more like Angelina than Angelina did herself).