But why can't I be a ninja assassin?

Have you ever walked out at the end of a movie with an overwhelming urge to become just like the star of that movie? You know, like suddenly wanting to take up martial arts after watching Kill Bill or joining a roller derby team after watching Whip It? Well I do. ALL THE TIME.

This is sometimes embarrassing for my husband. After watching Black Swan, for example, I was literally dancing down the main street of Newtown humming and doing sad little pirouettes in front of him while he tried to pretend he was invisible. When we got to the car, I excitedly informed him that I was going to take up ballet classes again. This hasn't actually happened yet. But it will! I am sure of it.

Sometimes a movie will have such a profound effect on me and I will so desperately want to be like the heroine that I actually change my style to dress a bit more like her.  I don't do it consciously. Not really. It is like watching something for 90 minutes is enough to brainwash me into believing that I have always liked that particular way of dressing and that I really need to start dressing like that ALL THE TIME.

I would like to say that this was something that I only did when I was little, but that would be a lie. I have done it in the last year in fact. In addition to some of the ones I have already mentioned in my other post (Winona Ryder in "Dracula" and everything up to "Girl, Interrupted", Liv Tyler in "Empire Records" and "Stealing Beauty", Drew Barrymore in "Mad Love"), here is a sample of some of the movie characters that have had the biggest impact on wardrobe - in chronological order.


Rainbow Brite was the first fictional character that I can remember trying to emulate after I watched "Rainbow Brite and the Star Stealer" on VHS. I think I was about six.

I used to have this very pretty and very colourful dress that I would wear ALL THE TIME because it was as close as I could find to Rainbow Brite's dress. I styled it with a stretchy, rainbow-striped belt. I cut out wonky-looking stars from different coloured paper and kept them in a little pouch (the stars were MAGICAL!!!!! They could make RAINBOWS!!!!!). I begged my parents to buy me a white pony (preferably with multi-coloured mane and tail) and was constantly frustrated by their failure to meet my demands. It also meant that I would skip everywhere instead of walking so it would look like I was riding a horse. I suspect, however, that this fooled very few people.

But one day, something AWESOME happened. My ballet class was going to be performing at the end of the year concert and we would all be dressed as toys... and I got to be Rainbow Brite!!!! With a proper Rainbow Brite dress and everything!!!!! (Thank you for sewing that for me btw mum. Oh, and for making the wig. I imagine that took a really long time and I probably didn't thank you properly at the time - so THANK YOU!!!!! It was the best costume ever.) 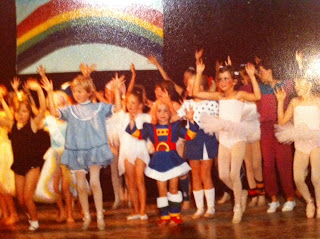 Yep, that is me - front, centre and determined not to let the fact that I was way shorter than everyone else get in the way of me being noticed.

Thankfully, though, I did eventually grow out of this phase and stopped insisting that everything be multi-coloured. But this was just the beginning of the influence of movie characters over my personal style.


Let's fast-forward to high school. By 15, I had lost most of my puppy fat and was starting to get a bit more confidence to like things that made me happy rather than just liking what was popular. I listened to grunge music and wore ripped jeans and quirky outfits that I picked up from op shops. Life was sweet.

I also started to watch edgy, violent movies which, in retrospect, probably warped my fragile, little mind. My favourite by far was "Natural Born Killers". I had a huge crush on Woody Harrelson and I wanted to be just like Juliette Lewis' character, Mallory Knox.


This might seem a little unhealthy - to want to be just like an abused, deranged, psychopathic mass-murderer - but I swear it was mostly about her style and attitude and not any homicidal tendencies (oh and I also liked talking with a Southern-American drawl).

So while the other girls at school were wearing denim a-line skirts and Quicksilver t-shirts, I started to get around in micro-hot pants (that I made out of an old pair of 70s flares), cut-off singlets and bikini tops, a fringed leather vest that kind of smelt like horse and my mum's old pull-on mid-calf boots with stack heels. I should remind you that "boho" was still about 10 years off from being a big, mainstream trend (thanks mostly to Sienna Miller) - in 1995, this was not a fashionable, socially acceptable look in the coastal towns of Australia.

And because I was still pretty young and didn't quite yet have the confidence to pull off something so off-beat, this look didn't last very long at all.

3. The Craft - the whole coven


During my final years of high school, I felt misunderstood and angry ALL THE TIME and wanted everyone to know it. And to make sure that everyone around me was aware of just how misunderstood and angry I was, I wanted to dress in a way that would reflect this - I had always felt like a bit of a misfit and by now I was quite happy to look like one.

While I had already started working on this look (wearing a lot of black with big boots, dying my hair black, keeping out of the sun and and scowling at everyone), watching "The Craft" really kicked it into high-gear. Because not only did the girls in The Craft wear lots of great, moody outfits, they also had these great ways of reworking their school uniforms so that they looked totally angry and outcast-y even while they were learning.


I embraced this look completely. No longer were my 12-hole cherry Docs enough for me - I bought knee-high lace up boots (not like the slutty ones you see now with the super-high heels, they were flat and capable looking - good for stomping around with lots of attitude), I replaced my school jumper with a long, navy, equestrian-style blazer that I picked up at an op-shop and my "natural" looking make-up was replaced with black eyeliner and white pancake. I was called a weirdo or a freak and took these as signs that I was getting the look right. I am sure that this, together with my taste in music (Nine Inch Nails, Marilyn Manson, Korn, The Prodigy et al), was of concern to my parents, but they didn't really say anything to me about it at the time.


I guess they figured that, much like Rainbow Brite, I would eventually get over this phase too. And they were sort of right, I suppose.


By the time I got to university, I was all about dressing to create an impact and getting attention - but not necessarily in a positive way. And this was definitely affected by the movies I was watching at the time. I was obsessed with Gregg Araki movies, especially "The Doom Generation". I basically dressed and acted like Amy Blue (the movie's anti-heroine played by a very young Rose McGowan) ALL THE TIME.

I had the black bob, red lips, cat-eye liner, short black dresses, chunky silver rings and lots of black PVC. For me, it was the perfect evolution from The Craft look that I had going on in high school.

And thankfully, because this was a pretty unknown movie, I don't think many people realised that I was just a cheap copy of a girl in a pretty cheap movie.

Actually, looking at the picture above, apart from the hair, it looks a lot like something I would wear now. Hmmmm...


Fast forward again to a few years ago. Now that I am a working lass, I find that I get a bit lazy with my day-to-day outfits and start going for what is comfortable and safe - like the first two things that I grab from my wardrobe that happen to match.

But after watching "The Devil Wears Prada" and worrying that maybe I was more like Andy "before" rather than "after" her super-cool, high-fashion makeover, I went on a bit of a shopping binge to buy structured and stylish work outfits and started wearing more accessories and even straightened my hair occasionally.


But it is just so hard to make this much effort ALL THE TIME so I relapsed into work slob-dom pretty quickly.


Fast-track now to last year - I have been in the work force for a long time and am, for all intents and purposes, a proper grown up.

But this didn't stop me from leaving the cinema after watching Kristen Stewart in "The Runaways" and declaring to the world that I wanted to be a rock star!

Of course, at 31 and with no real musical talent, this is not really an option for me. So instead, I just started to dress like Kristen Stewart when I wasn't at work - all skinny jeans, band t-shirts, leather cuffs and converse one-stars. These were things that I already owned but I definitely started wearing them more after watching that movie. She just looked so fricking cool! (Surly, yes. But also very cool.)

And that brings us to now. It does occur to me that, so long as I keep borrowing looks from movie characters, I will probably ever settle on whatever my "look" is. And it also means that I have to be really careful with what movies I watch. I mean, after watching "Underworld", for example, I did contemplate buying some rubber pants but thankfully my husband talked me out of that one.

I love your posts gem x I remember the witch craft days well! I lost all colour for many years! I remember teniell was our human victim lol