You have had a whole day without knowing what I am wearing so, even though I haven't been at work, I have decided to throw you a couple pics so you can see what I knock around in.

Saturday, I had to meet some of my favourite people for brunch in Surry Hills and then went shopping (because that is what I do best) for some new things for the house (and for me - whatever). It is starting to really warm up now in Sydney too so I was able to get my legs out from under the opaque tights for once. Ah and how their pastiness glowed in the sunlight! 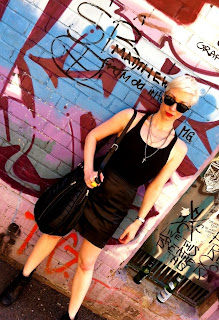 Husband suggested that I might want to rethink my top because it didn't really go with the skirt. When I argued that I was just contrasting textures and that it totally worked, he admitted that he actually just hated the skirt. Which is just silly because: a) the skirt is ace; and b) he had originally complained about the top!

I chose to ignore him though. He can veto shorts but I am not going to start letting him dictate what skirts I can wear - I have drawn a line! Humph.

I decided to give my tattoo a bit of attention - it is almost a whole year old! - so I wore a tied singlet that showed it off. Everyone else seemed to have the same idea and, after seeing everyone else's cool ink, I am so very keen to get another one done ASAP. 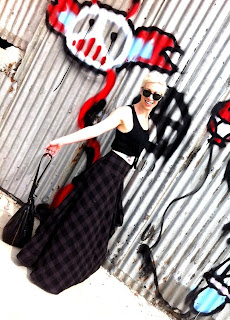 Husband apparently approved of this outfit. He is very difficult to predict. I think I should stop bothering to even ask him any more.

In other news - I have decided that I will keep posting pics of my outfits next week because I am only at work for three days anyway. After that, I am getting dental surgery (boooooooo!) so I will be hanging out at home with the cats, drinking my meals and taking pain killers. And hopefully this means that I will then have time to do a proper post about something other than me and my wardrobe woes.

Hope that works for you guys!