Not that long ago, I was going through a sort-of identity crisis because i thought maybe the reason I disliked hipsters was because I actually was one (and, of course, I blogged about it - check it here).

To deal with this, I have convinced myself that I have been like this all along and that the hipsters are all just copying me (yes - even the ones who live far afield in Williamsburg and the like). Which is cool. Highly unlikely, but cool.

But now, I have a new theory. I am thinking it goes much deeper than this - I don't think I ever really had a chance to begin with.

I think that I may have been born with hipster genes.

And here are the people responsible for this - aka 'My mum and dad'. 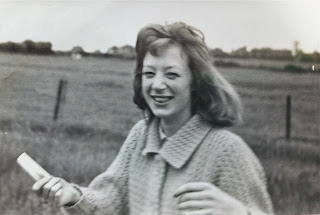 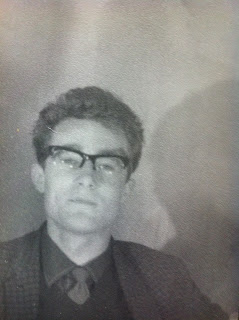 Not sure how old they were in these photos but, judging by my mum's carefree, happy expression and my dad's look of contentedness, I am guessing that it was pre-children. 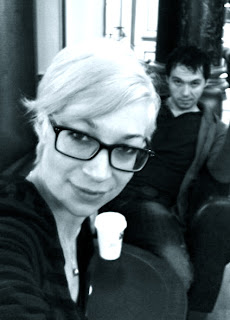 So, my mum and dad's hipster credentials include:
1. Until recently, they owned a secondhand bookshop.
2. Now, they spend their time looking after chooks, growing organic veges and working on various art projects.
3. Mum enjoys doing things like making bread from scratch, sewing, knitting and all sorts of other things that would probably be cheaper, and certainly easier, if you just dropped down to the local target. (Definitely not better though.)  She also likes to paint.
4. Dad is obsessed with photography, owns a number of cameras (both digital and film including a few manual ones).  He also processes his own photos and makes his own frames.
5. Musical preferences are jazz, classical and Neil Diamond (actually, I think only mum likes Neil and not sure if that is actually a hipster thing but I wanted to include it because I think it is ace).
6. Moved to the country - the middle of what is essentially nowhere - because the coastal town that they used to live in (where I went to high school) had essentially sold out.
7. Both wear glasses and have never gone for contact lenses.
8. Dad has a beard and seems to prefer cardigans to jumpers.

Notwithstanding the above, there is a big and very important distinction between my parents and hipsters though - they are into all these things because that is just what they dig. It isn't some kind of trend for them. In fact, they probably aren't aware that the above things are considered highly desirable to the hip, young thangs today.

I didn't choose to be like this, you guys - I was just born this way!!!

Want more proof? Check out this photo of me in pre-school (so I guess I was about 4 or 5): 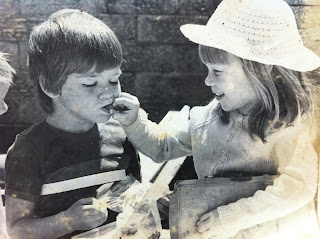 (The boy is not relevant to this post at all but I didn't want to edit him out because of how truly adorable he is and also because I was totally in love throughout my entire childhood. Sorry Tony!!!)

Anyway, the cardigan, straw hat and hard case that I am rocking in this photo were all my own choices. I had newer, more normal looking clothes that I could have worn but this is what I wanted to wear that day because it was a special day (some kind of school fete or something which is why there was a photographer there). My sisters were horrified that I wanted to wear this and tried to get me into a nice dress and to put my hair up nice and neat - but I would have none of it! When they found out that my photo had been taken by a newspaper photographer, they were mortified.

But I still kind of think it looks cute.
Posted by Emma M at 3:51 PM

Your Mum and Dad sound super cool. And that photo of you as a kiddle is...heeeeeeeeeeeeeeee!!!!!!!!!! Adorbs. Thanks Em, am starting the week with a smile :)